Week 10 of 'The 50' is LIVE, featuring Warren Sapp, Sebastian Janikowski, and the highly anticipated MUT return of Calvin 'Megatron' Johnson. Warren Sapp is a Power Rusher DT Archetype with 76 SPD, 93 BSH, 92 PRC, 91 PMV, 90 FMV, and 90 STR ratings. Sebastian Janikowski is a Power Kicker with 91 KPW and 90 KAC ratings, making him both the most powerful and accurate kicker currently available in MUT. Calvin Johnson is a Deep Threat WR Archetype with 92 SPD, 93 SPC, 92 DRR, and 92 JMP to name a few of his 90+ ratings. Check out each player's full ratings, set requirements, challenges, and Store offerings below: 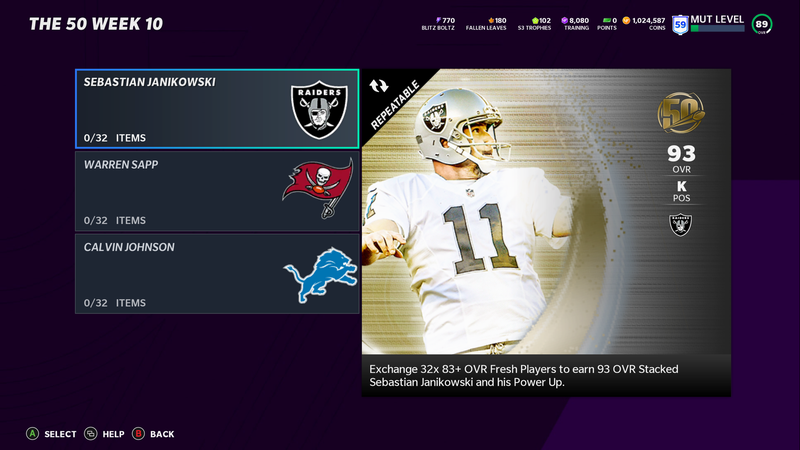 Play moments from the careers of this week's players that were selected for 'The 50'. If you earned the 64 possible Stars from Weeks 1-9, you can earn a NAT Fresh Week 10 Player by completing the following 6 challenges:

What are your thoughts on this week's release of 'The 50'?