Weekend one of Double Elimination action is in the books, with plenty of surprises from the Madden 22 action. We saw a little bit of everything from a plethora of games over the first 2 days of the tournament. 4 players (2 from each console) have already qualified for the live event, while also guaranteeing themselves $15,000 in prize money. Let's take a look at who conquered the Winner's Bracket on each console:

Mr Football 88- The Oregon Duck/former Falcons club champions is back to a live event here in Madden 22. Mr Football took down BigBully EB in winners bracket semis to seal his spot in the Live finals. He tweeted this after his win:

Could the Football make a run to a final? He has live final experience and is playing some of the best Madden of his career heading into the Ultimate Thanksgiving tournament.

Gabagol94- If you don't know who Gabagol is, you will after this weekend. A member of the new WD Madden Crew (with other young guns Solty, Jonbeast, and Dusty) Gabagol is making his first ever live final appearance. You could tell he was a tad excited when he closed out his semi final win:

While he may be a newcomer to the live final scene, he has plenty of people behind him who have been in that same scenario before. Don't count out the Gabadabadoo (I'd like to apologize to Gabagol for the number of stupid jokes I will make about his tag).

CleffTheGod- If you don't know who Cleff is...I'd like to thank you for reading about Competitive Madden for the first time and I encourage to tune into the live finals on Nov. 19th. Cleff goes 2/2 on live finals appearances in Madden 22, and is looking to improve upon his runner up finish in the Ultimate Kickoff tournament. Cleff took some time on Twitter to remind the world who he was:

No doubt that Cleff will be a favorite going into the UT tournament, as he looks to get that elusive first belt. We know Cleff is going to bring the passion and enthusiasm on gameday.

NoahUpNxt- Aaaaaand speaking of passion and enthusiasm, welcome to the live final the newest member of the West Virginia Mountaineer E-Sports Squad NoahUpNxt! Noah is looking for belt number 2 after storming onto the scene with a win in the Madden 20 Challenge (in his first live event, Gabagol take notes). WVU Esports took some time to congratulate their newest recruit on Twitter: 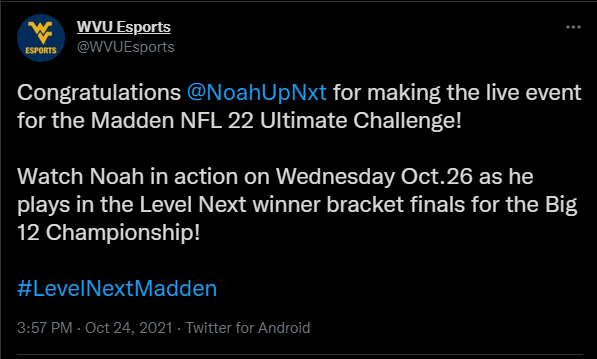 We know the TGL crew will be hoping the luck and momentum will be on the side of young Noah Johnson.

4 spots are still up for grabs in the Loser's Bracket, come back tomorrow for a preview of some of the biggest remaining matchups. Congrats to all those who have qualified and good luck to the rest of the players!