A new set of Gridiron Notes was released today by EA that focuses on Playbooks and AI Gameplay Updates in Madden 21. Below is a brief overview of these updates:

For the full EA Gridiron Notes from today, click here.

NFL Live Playbooks are back in Madden 21. You may be familiar with this concept from last year but for those who aren't, NFL Live Playbooks allow EA to update team playbooks throughout the year to better reflect the style of football that the team is playing during the NFL season. Updates to playbooks in Madden 21 will be delivered via "Title Updates". A good example of this feature in action is how the New England Patriots offensive playbook will be adjusted to better reflect the types of plays Cam Newton may run this season compared to Tom Brady last season.

While playbooks will receive updates throughout the year through the Live 2.0 feature, default playbooks at launch are also seeing some changes. Playbooks at launch will now better reflect team changes made during the offseason to the Head Coach and Coordinator positions. These changes will help craft the playbooks to better fit the team's anticipated style based on film study and interviews. An example of this is the Carolina Panthers who overhauled the majority of their coaching staff and is expected to run an offensive scheme that is quite a bit different from last year. In turn, you will notice some major changes to the plays contained in their playbook for Madden 21 compared to Madden 20. 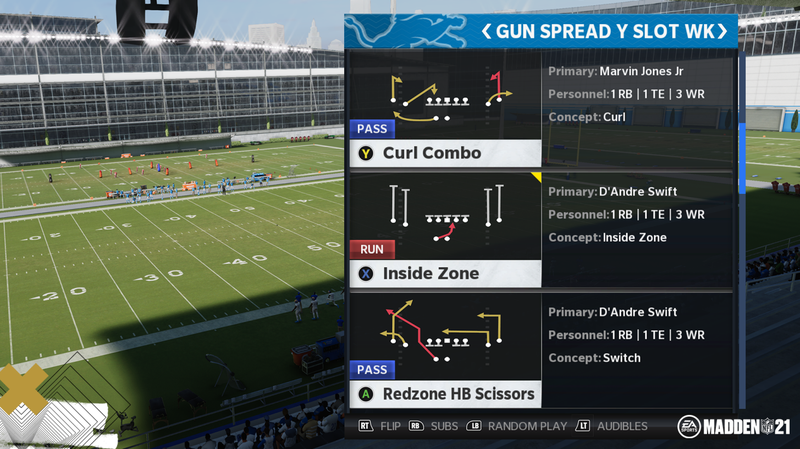 The focus on defensive playbooks in Madden 21 is making each team's playbook more unique and to better reflect what they run in real life. This should help give each team a more realistic feel while allowing them to use formations that best utilize their unique personnel on the field. You will also notice some of the new offensive and defensive formations introduced through NFL Live Playbooks last year incorporated at launch in this year's playbooks. 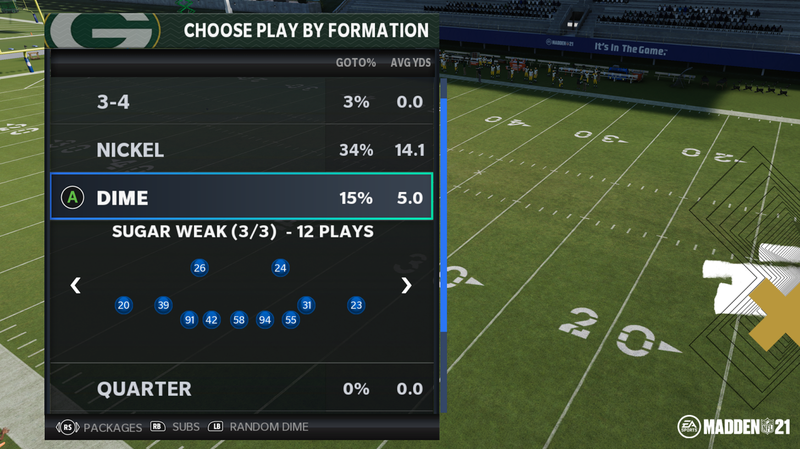 In Madden 20, offenses would use motion pre-snap to shift the formation strength and make it difficult for the defense to properly adjust. In Madden 21, the new "Adjustments to Motion" system will use the same logic as the "Defensive Auto Flip" feature. By treating the motion the same as an audible, defenses will be able to properly align and maintain gap integrity in the run game when faced with pre-snap motion. This feature can be disabled in settings for users who do not wish to use it.

With lower-rated DBs winning press-interactions against receivers too often last year, EA has made some adjustments that will better focus on the matchup between the press rating of the DB vs. the release rating of the WR. In Madden 21, you can expect to see more appropriate press animations and even complete fakeouts off the line of scrimmage. Man Coverage has also been tuned so receivers with higher Route Run ratings (SRR, MRR, DRR) vs. a defensive back with a lower MCV rating, will have a better chance at beating them on specific routes down the field. 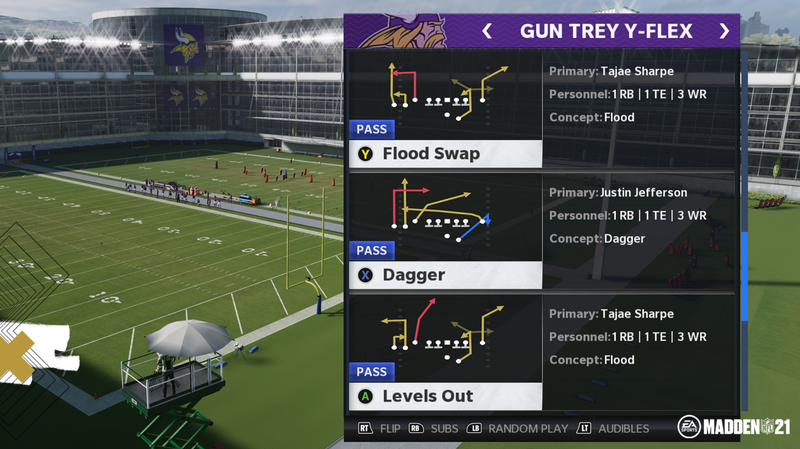 AI-controlled teams in Madden 21 will utilize a more diverse set of plays making them less predictable and more aggressive. AI-QB's will do a better job at recognizing coverages, going through pass read progressions, and executing RPO plays (run-pass options). On defense, AI playcalling near the goal line will be more diverse and allow users to become more creative with their playcalling in these situations to score. AI-controlled teams will better account for the score, quarter, play clock, and timeouts when managing the clock down the stretch of games. An increase in awareness will better help the CPU decide what to do in these crucial situations at the end of the half or game.

AI-Quarterbacks have received an increase in their awareness pre-snap to make the appropriate adjustments necessary to counter a defensive play once they have seen it enough times. Don't be surprised if you see an AI-QB calling audibles and adjusting protection pre-snap to better adjust to a specific defensive play that keeps stopping them. If you want to consistently beat the CPU in Franchise and MUT Solos, you better be ready to mix up your defensive play-calling to become more unpredictable. When faced with pressure, expect AI-QBs to make better decisions based on their individual strengths. For example, Lamar Jackson will be more inclined to scramble when faced with pressure as opposed to a pocket QB who will look to throw the ball away to avoid a sack.

Expect AI-ball carriers to exhibit better decision making in the open field, when selecting a running lane, or making the decision to get out of bounds or slide to protect themselves and the football if they're a QB.

The next round of Gridiron Notes are expected to be released on Tuesday, July 28th, and will focus on feedback provided by the community about the Beta.

Which Gameplay Updates are you most excited about for Madden 21? Share your thoughts with us in the comments below.