Tonight on the EAMaddenNFL Twitch channel, Kraelo was joined by Gameplay Producer, Clint Oldenburg to discuss new gameplay features coming to Madden 21! Below are links to the Gridiron Notes, Twitch Rebroadcast, and a brief summary of what I feel were the key highlights.

For a detailed breakdown of all the new gameplay enhancements, check out the full EA Gridiron Notes here.

To view a rebroadcast of the Madden NFL 21 Developer Gameplay Deep Dive with Clint Oldenburg on Twitch, click here.

With Madden 20 being considered a run-heavy game, there was a concerted effort by the development team to help restore the balance between running and passing for Madden 21. Force Defenders will exhibit better positioning, angles, anticipation, and prediction when setting the edge; especially against outside runs. Hammer and Fill players are responsible for the gap assignments inside the force players. Wider pursuit angles and better gap integrity should help these players navigate traffic to seek out the ball carrier and make run defense more realistic.

If you ever wondered why your opponent was spamming the flip play audible in Madden 20, it was to eventually gain an advantageous look in the run game. To help counteract this, Madden 21 will increase the likelihood of the offensive line committing a false start when excessively flipping the play pre-snap. The increased likelihood of a false start kicks in with the 3rd flip play audible.

Defenders in open space will have increased awareness of their surroundings and shed blocks more intelligently when a ball carrier is nearby. Hit Sticks and dive tackles have been adjusted to make them more accessible and functional. Momentum will play more of a role when pursuing a ball carrier and attempting to land a Hit Stick or dive tackle.

A new coaching adjustment option in Madden 21 has been introduced to give players the ability to customize the depth of their different zones on defense in 5-yard increments. Adjusting the depth of your flat, curl flat, and hook zones will override the default depth and allow for a more customizable approach to fine-tuning your defensive scheme and making on-the-fly adjustments against your opponent. 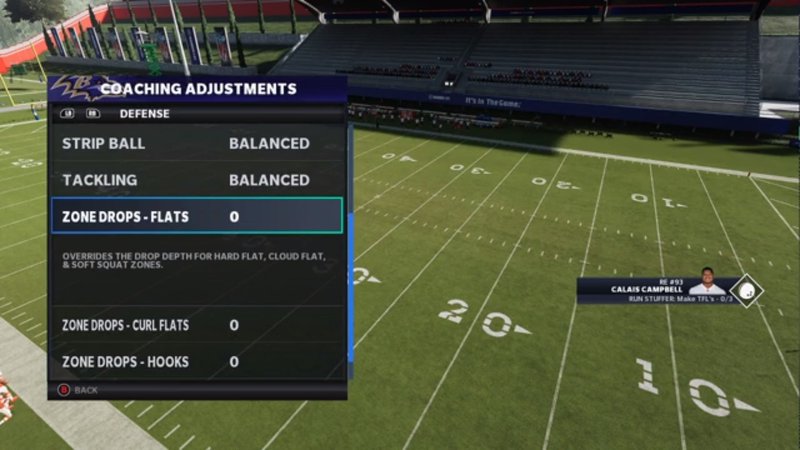 Every QB in Madden 21 will have the ability to throw out of a sack. The accuracy and power of this throw will be determined by how far along into the throw the QB is before contact is made by the defender. If you are just starting the QB throw animation when contact is made, you can expect a less accurate and less powerful pass than one where the throw animation is nearly completed before contact is made by the defender. Another new feature for M21 is the "Under Pressure" throwing animation on deep passes (40+ yard throws). When a QB perceives an increased "threat-to-impact" from a defender, they will speed up and use their under-pressure animation. The accuracy and power of this pass will be affected by the player's TUP or Throw-Under-Pressure rating.

In Madden 21, audible options will now take into account the player personnel currently on the field. For example, if you are currently using 1 RB and 2 TE's, you will only be able to audible into another formation that utilizes the same 1 RB and 2 TE personnel. This feature is currently only available on the offensive side of the football.

In an effort to help balance the effectiveness of scrambling QBs in Madden 21, there will now be more emphasis on stamina and fatigue for players who are not primary ball carriers (all non-running backs). If you are featuring one of these gadget players as a primary ball carrier, they will fatigue much faster and fumble more often when used repeatedly and tackled.

Wide Receiver Route and Coverage Defender Abilities will now be tied to the location on the field instead of a particular route or assignment. For example, last year's WR slant ability could now be a short outside ability. In this example, the ability would only activate on a route under 10-yards and outside the hash marks. As you may have noticed in M20, the QB pass lead abilities would sometimes lead your receiver too far and actually result in a more inaccurate pass due to this mechanic. In M21, pass leading will now be based on velocity. When activated, the ball will reach the intended receiver faster than usual resulting in less time for defenders to react and jump a pass.

Madden 21 will have an increased focus on skill stick moves (right analog) for the ballcarrier and allow players to chain together multiple moves. Left and Right with the analog will still control Jukes left and right. Down on the analog will now trigger a move known as "Dead Leg", where a ball carrier hard plants their leg allowing them to change direction quickly. In previous versions of Madden, up on the right analog would trigger the "Truck" move while the "Y" button Hurdled. In M21, these moves have been reversed. This button change between Truck/Hurdle is not confirmed as permanent at this stage and could be changed back based on player feedback during the Beta. Good news for all you showboaters out there who enjoy a good celebration, this will now be controlled simply by pressing the Left Trigger instead of the previous 3-button method. 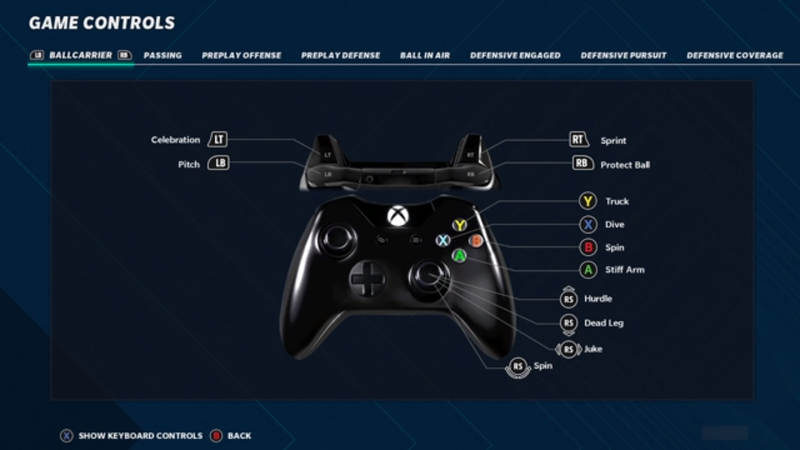 Similar to the Skill Stick concept on offense, defensive pass rush moves will be focused on the right analog. In an effort to reduce spamming and force defenders to be more strategic with their moves, notches are displayed above the pass rusher displaying the number of moves they have available to use during that play. One move is regenerated between each play with extra notches granted through Abilities and during breaks in action such as Halftime and 2-Minute Warnings. 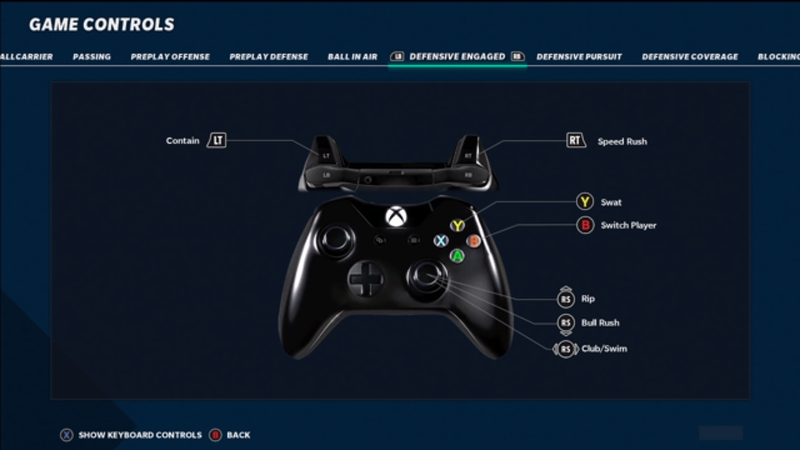 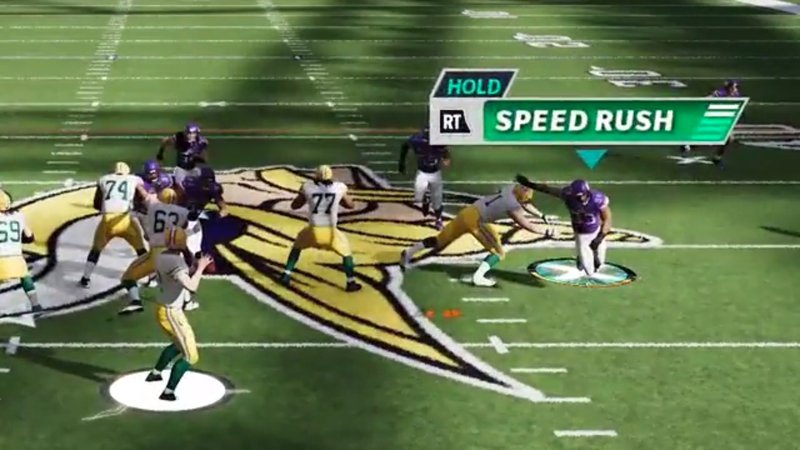 One of my personal favorite improvements is the Blocker Resistance feature. As an offensive lineman goes up against a specific defensive player, they will now have the ability to remember which side the defender has been beating them on from previous plays and begin to build resistance to that particular side. Defensive pass rushers will now have to get more creative when rushing the QB and mix up their moves, direction, and matchups if they would like to consistently break through the line. 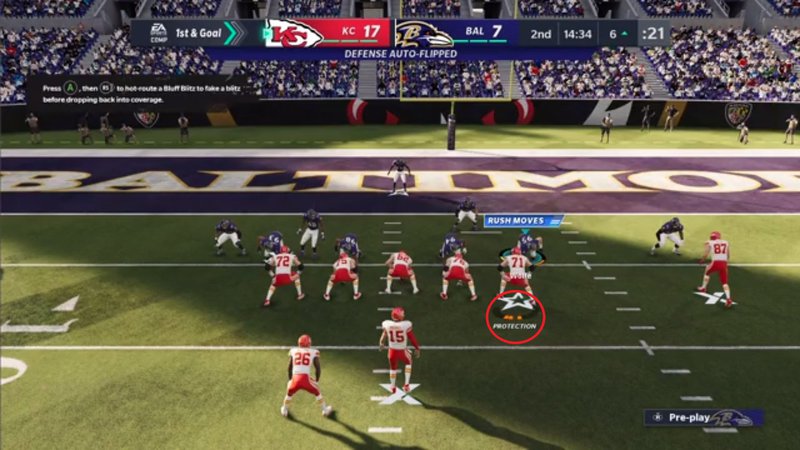 The original release of the Beta was scheduled for today but has been delayed until a later date. If you signed up at the link Kraelo teased in the last M21 segment, you are registered for a chance to play the Beta. If you did not register in time and would like a chance to try the Beta, additional codes may be awarded through the following EA Twitter accounts:
EASPORTS_MUT
MaddenNFLDirect
EAMaddenNFL

What are your thoughts on the latest Gameplay Deep Dive Notes? Which feature are you most excited to see in action?