For those competitive Madden fans, the final and biggest tournament of the year kicks off tonight with The Ultimate Madden Bowl. This tournament features 14 players who have qualified through their performance in the MCS, with 2 qualifying through the gauntlet known as the LCQ. There is not only a Madden Bowl belt on the line, but a total $1 Million prize pool for the competitors. The first round of games will be completed tonight (1/22) and tomorrow (1/23), with the remaining rounds eminating from the EA Studios in San Francisco, CA. This will mark the first time in 2 years that there will be a live, in person MCS tournament. It all culminates February 6th as we crown the Ultimate Madden Bowl Champion. Here are tonight's games: 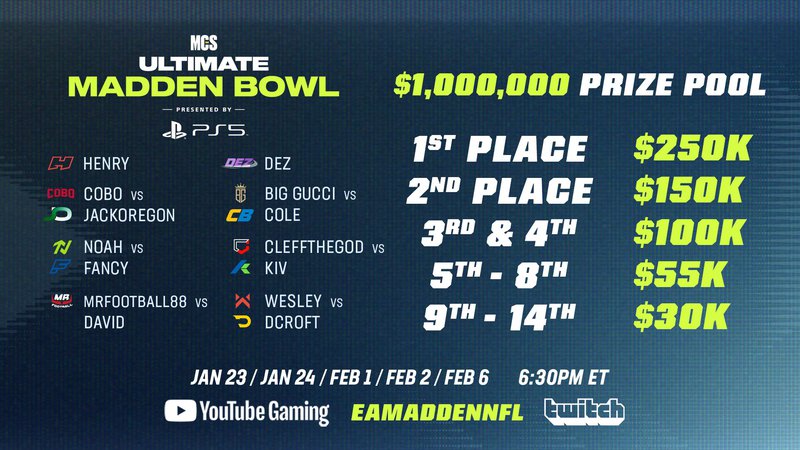 Tune in tonight on the EAMaddenNFL Twitch and Youtube starting at 6:30p est. Nick Mizesko, Tyler Davis, OneGreatUser, and Boogz will have all the action. Drops will be live, as watching each day of the Madden Bowl will earn you tokens towards a 95 OVR Derwin James.