Today, EA released a trailer and Gridiron Notes previewing Next Gen Stats and how they will influence Madden on next gen consoles. If you would like to watch the trailer, hit play on the video above. Continue reading for an overview of Next Gen Stats:

What is “Next Gen Stats”?

NFL player tracking, also known as Next Gen Stats, is the capture of real-time location data, speed and acceleration for every player, every play on every inch of the field. Sensors throughout the stadium track RFID tags placed on players' shoulder pads, charting individual movements within inches in every NFL stadium.

Leveraging the power of NFL Next Gen Stats, Next Gen Player Movement is fueled by real athlete-data, route paths, and acceleration rates, allowing the next generation of Madden NFL to deliver the most realistic, authentic, and fluid player movement in franchise history. Feel the most elite NFL athletes at every position move on the virtual field like they do in the real world.

Expanding on the player archetypes introduced in Madden NFL 21 on the current generation, we’ve added more animation content and nuance to each unique archetype on next generation tech so that they will move and feel even more differently on the sticks. For example, a big, bruising ball carrier will run with a heavier weight and produce more tackle outcomes where he gains extra yards, while a small, agile ball carrier will change direction efficiently and avoid tackles rather than power through them.

Unique player movement per archetype, with each captured across multiple body types: 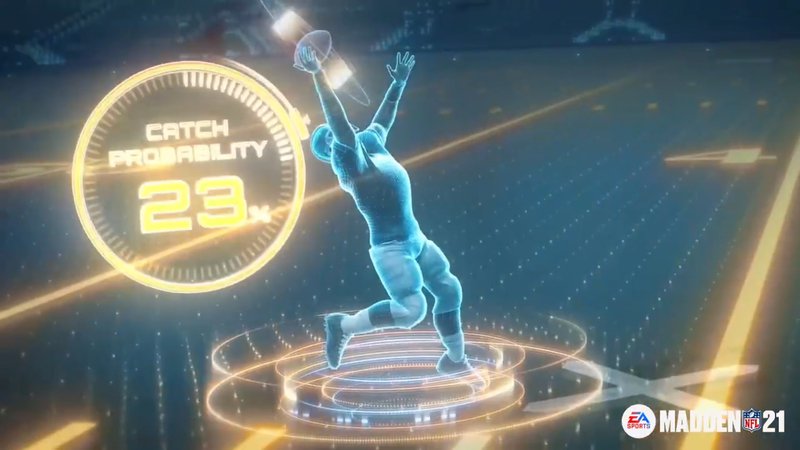 Next Gen Stats and Route Running

With Next Gen Stats innovation, route-running in Madden NFL 21 has been completely overhauled. Receivers will run actual routes logged by Next Gen Stats’ real NFL game data. In addition to speed and acceleration rates, our animation engine is also leveraging player-specific route paths from Next Gen Stats for individual receivers. For example, the path that Green Bay Packers WR Davante Adams takes on a deep crossing route on a Sunday afternoon will be the same deep crossing route reflected by Adams in Madden NFL gameplay. The result is natural-feeling, fluid routes with more rounded turns, athletic nuance and player differentiation.

Before: On previous gen, our receivers ran from one specific point to another specific point at top speed all the time and made very similar cuts, with very little difference between unique players.

After: On next gen, player ratings and archetypes will heavily impact the quality and speed of each route and they will be run as an entire route from start to finish rather than each individual portion of a route on previous gen.

Next Gen Stats and Defense

Next Gen Player Movement doesn’t just benefit the offense. We also analyzed the Next Gen Stats data for defensive players in terms of speed, facing direction, and acceleration. This data has allowed our animation engine to provide the appropriate content to make defenders who are backpedaling and strafing much more natural looking and athletic. In coverage, players will react and break on plays more consistently and predictably. And Next Gen Stats also brought improvements to AI pursuit, so that when AI-controlled defenders are pursuing a ball-carrier, they will now get in better position to make a play or be in a better position for a timely click-on for the user to make the play.

Lastly, but just as important for the defensive side of the ball was next level tech for tackling. We’ve built a new tackle prediction and anticipation technology we call ‘Rally.’ With Rally, not only will you be able to start tackle interactions easier, but you’ll see more variety in tackles, improved visual quality in terms of tackle prep and anticipation, and more authentic interactions during impact moments. 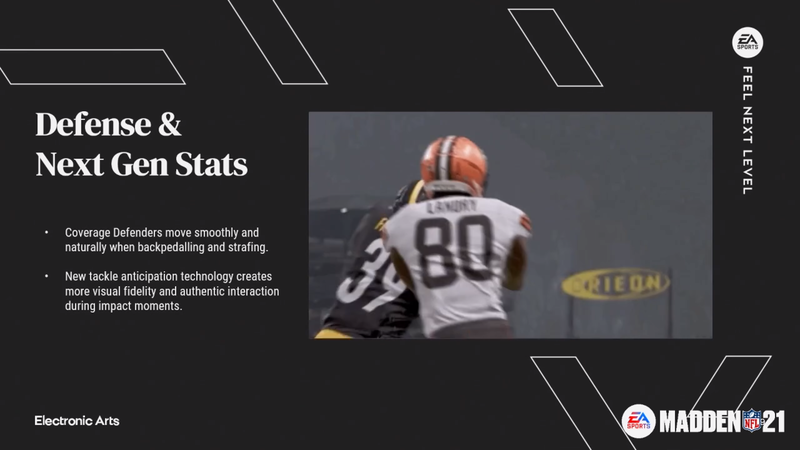 To surface some of this data to our players, we’ve also added presentation elements to our instant replays, so players can relive the thrill of game-changing plays, all backed by Next Gen Stats. Next Gen Stats-powered replays can be triggered by certain statistical moments and then they are presented in beautifully rendered cinematics throughout the gameplay experience.

With the increased power provided by next gen consoles, Madden NFL is able to replicate the real-time positional RFID (radio-frequency identification) data collection system used by the NFL to calculate Next Gen Stats data on the virtual gridiron. This data is then used to create these new and dynamic replays to highlight the biggest plays by the best players in the game, all shown through the lens of Next Gen Stats, just like you would commonly see on any NFL broadcast in today’s NFL.

So, the next time you flatten a left tackle and sack the quarterback in under two seconds, put a couple of defenders on skates for a 40-yard rush, or rocket the ball 60 yards downfield for a game-winning touchdown, you’ll get the recognition you deserve and it will all be backed by hard data. 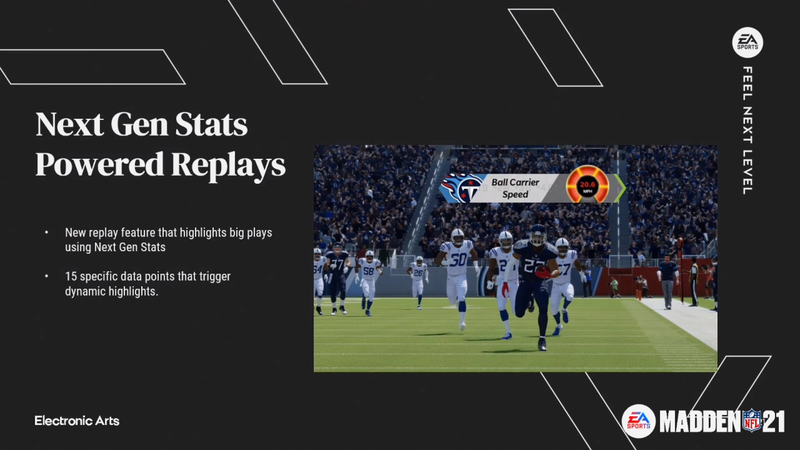 To provide a solid foundation for the player movement system, we’ve also made a significant update to our play-call system, giving players more control to call the best plays for the right players on every down, via ‘By Player’ play-calling. And you can now keep all of your preferred plays on speed-dial with the new favorite play marker and playbook tab, which provides an intuitive way to save your favorites and easily find them later. An easily accessible go-to play feature is something our fans have requested for a long time and we’re excited to deliver it on next gen.

We’ve made the play-call screen more intuitive and user-friendly, while still having the depth and power our core fans love. In addition to the enhancements described above, you’ll also be able to see your Superstar X-Factor abilities and their stats for the current game, all right inside the play-call screen. 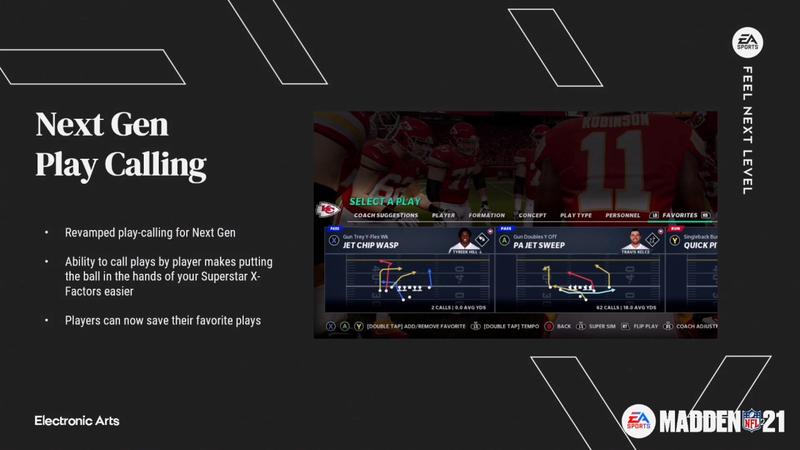 Because Next Gen Player Movement has had such a significant impact on the pace of play in Madden NFL 21, here’s some other gameplay improvements that come along with the new gameplay system:

Next Gen Stats and player movement opened up the ability to lead receivers on deep routes more effectively.

Movement in and out of the pocket is smooth and athletic. You’ll also feel the differentiation in movement all over the field when comparing pocket passers to mobile QBs.

Head movement is more realistic for receivers when running routes and for ball carriers in terms of when and where they are looking, making them look more aware of the on-field action.

We’ve already talked about our new Rally tech, but we’ve also improved gang tackles. Gang tackles will trigger more often with much more variety. We’ve also made improvements to tackle momentum and it’s now much more realistic with direction, weight, and speed of the players involved taken into account for tackle selection and post-tackle follow through. And even defensive users can now interact with gang tackles.

With the passing game moving at a more realistic speed, the pass rush has more of an impact relative to the timing relationship between the QB dropback, the depth of the route and the speed of the incoming pass rushers.

Faster load times powered by next generation tech get you in the game quicker than ever. Never lose focus as stadium environments will load with unprecedented speed, letting you get to the kick-off in seconds.

Redesigned loading systems on next gen tech allowed us to maximize I/O bandwidth and processing by utilizing the high speed SSD and integrated I/O of the next generation consoles. Stadiums and environments will load almost instantly. The front-end experience and in-game are more connected than ever providing you more time of actual gaming and less time waiting.

What's your first impression of the Next Gen gameplay and features? Share your thoughts in the comments below.