A new Title Update will be released on Thursday, November 12th that focuses on enhancing the Franchise Mode experience. Below is a breakdown of everything coming in this update as well as what's in store for future updates:

We wanted to share a deep dive on what is coming to Franchise Mode in Madden NFL 21 via a Title Update coming November 12th!

Dev Note: We are delivering the first of three Madden NFL 21 Franchise updates with this release. For the Madden NFL 21 post launch releases we have worked with Franchise community members to come up with a number of updates focused on improving usability for core users of the mode as well as a number of tuning upgrades. We are sharing the first batch of updates and giving a preview of the second batch coming later in the cycle which is targeted to arrive in mid-January. As always, please provide feedback on these changes via Madden Voice which will open 48 hours after the update is released.

While the team delivers these features in Madden NFL 21 to improve utility and agency, we are hard at work on more significant features for the upcoming year, and look forward to engaging with the community on that work in the near future.

Star, Superstar, and Superstar X-Factors will now have desired counts that are treated as the “correct” amount of each Dev Trait in your Franchise (a new League Setting has been added for each Dev Trait to allow Commissioners to decide the right amount for your league experience, and default values match the roster count of Dev Traits that shipped in Madden NFL  21’s Preseason Roster) in the offseason, new logic will run to decide which players are eligible to regress. If there are more players at a specific Dev Trait than the setting says is desired, eligible players will be regressed in priority order until the target is met (in some cases, there may be slightly more than target after regression if no players were found eligible). If you prefer to play in a league where Dev Traits can’t regress, you can also turn OFF Dev Trait Regression in League Settings.

We also tuned the criteria to receive a Breakout Dev Scenario for all positions to prevent an overabundance of high Dev Traits after multiple years (and make sure we’re increasing the Dev on players who truly deserve it).

There will also be three new QB Breakout Dev Scenarios that can occur throughout your season and a league setting to turn all Breakout Dev Trait Scenarios ON/OFF. When Breakout Scenarios are OFF, users will only progress their dev trait by end of season stat rankings and awards.

Dev Note: This change, like many of the changes being delivered via post launch updates this year, is to maintain authenticity and provide more agency to commissioners to define the experience for their players.

Starting Week 13 of the regular season, there will be a Things To Do item that takes you to the current playoff picture if the season ended that week including the seeding for each team that would be in the playoffs. Once Wild Card week begins, the playoff bracket will also have the scores of all games that have been played, and the box score available by clicking on the matchup. There will also be a way to access this bracket through the “schedule” button, with a new tile labeled “Playoff Picture”. 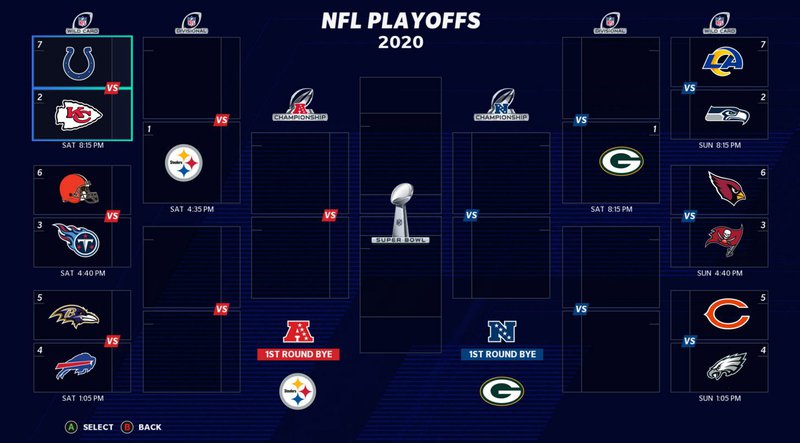 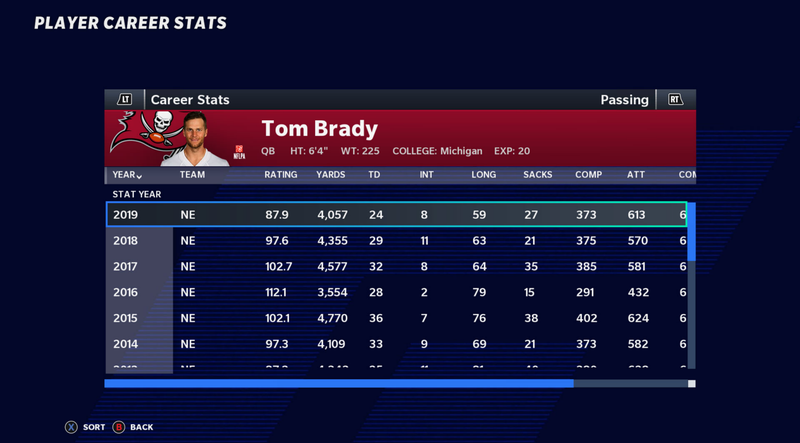 Another highly requested community feature, we brought over our functionality from player mode that allows the player to alter the Superstar and Superstar X-Factor abilities on their players inside of Core Franchise as both a coach and an owner. Commissioners will be able to edit the abilities on players that are controlled by other players and the CPU as well. Abilities will continue to follow slot and OVR requirements per archetype, so a player must reach the OVR threshold for an ability in the specified archetype before they are able to apply it. All of this functionality occurs directly on the player card by clicking any of the abilities.

In Re-Sign Players week, there will now be a Things To Do item that takes you directly to the Transactions screen sorted to Retired players to provide a quicker look into who is riding off into the sunset. 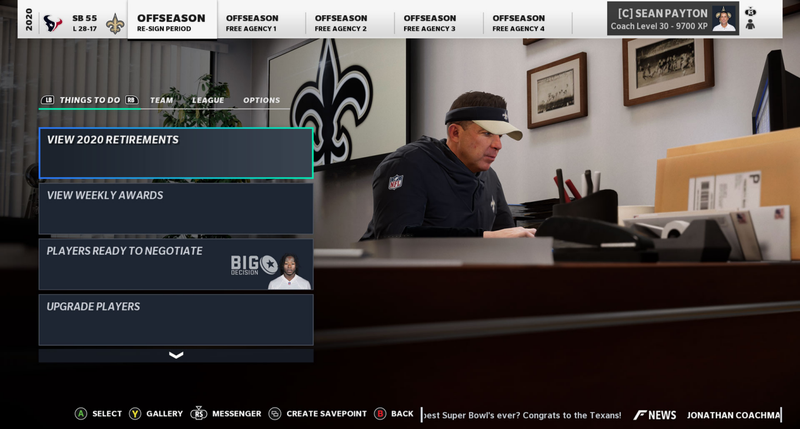 We also wanted to share what the team's working on for the next Franchise update for Madden NFL 21 which is targeted to arrive in mid January!

Personnel Logic Improvements
New guidelines for CPU draft logic to assist teams in whether they should or should not have interest in drafting a first round QB. Addresses teams drafting two first round QBs in consecutive years, along with other roster-context considerations QBs a more authentic window to develop before a replacement is considered to be drafted.

Commissioner Controls: Undo FA Signings - Offseason Only
Commissioners are able to undo FA signings in the offseason directly through the transaction log. Simply click on a signing and revert it to send the player back into the free agent pool.

Commissioner Controls: Team Override Settings
Giving commissioners of leagues the ability to turn on/off or allow users to keep individual settings for Heat Seeker tackling, Ball Hawk, and Switch assist – one of our top requested commissioner requests, this creates a way to level the playing field regarding assist features.

Commissioner Draft Tools
Giving commissioners the ability to assign autopilot during the draft, along with pause/resume functionality. This has been a top community request for a number of years now.

Commissioner House Rules: Play Cool-Down and Repeat Play Limits
After these settings made their debut last year in MUT and Superstar KO, House Rules became one of the most requested features for franchise players and we are incredibly excited to bring them to you. Take control as a Commissioner and dictate how many times a play can be called in a game, and how long a player must wait before calling the same play again.

What are your thoughts on the planned Franchise updates coming to Madden NFL 21?